*This is Part 3 of my recent adventure back east.

Saturday morning, assembled my go-bag and got moving. Took mass transit from Linda’s house in Arlington, over to where my friends (and fellow photographers), Alicia & Janique were staying. My bus driver said she wished she could be at the march too.

“You’ll be with us in spirit.”

Transferring to the subway was tricky, because although there was a platform full of women in pink hats, bearing clever protest signs, there was an acute shortage of space on the train. When the doors opened, muffled voices from inside shouted, “There’s no more room!”

Squeezed myself onboard, which meant full-body contact with several strangers and a face full of dreads. Nothing I couldn’t bear, it had to be done. Besides, Alicia & Janique were in an area called Foggy Bottom, just a few stops down the line.

Two minutes after I got to there, we locked ourselves out on the back patio. (There’s that eyebrow twitch again!) It was a miracle the only person with a spare key was less than twenty minutes away.

A guy named Miguel was our driver to the next gathering point. He was deaf, wrote notes to communicate. Made me regret that I’ve never learned sign language. (Or any other language, aside from pretending to study French in high school.) Miguel was excited for us, gave him a hug before disembarking near the National Mall.

There we joined a mob of fired-up women, amassing. We’ve all been in big crowds before, but this was like nothing else we’d witnessed. People (mostly women) were packed like squirming sardines, as far as the eye could see. At various times we latched onto little caterpillars of determined individuals, weaving their way forward. Had no way of knowing where the stage was. No screen in sight and the only sounds we heard were chanting, singing and cheering from the crowd.

Never found the other handful of Alicia’s friends. It was close to impossible to move and cell communications weren’t going through. Wondered if this took long enough, would it become a peepee protest? Mentioned this to whoever was squished around me. Got some chuckles but apparently everyone had super-bladders.

When it had been over two hours, slowly inching toward the front, I’d long since lost Alicia & Janique. But now, could at least see the screen. Caught glimpses of the Women’s March organizers as well as Scarlet Johansen and Cory Booker, among a long list of recognizable people with something important to say. Alas, it was another hour before I was close enough to hear them. Frustrated and losing patience, the crowd broke into periodic repetitions of, “Let’s march now! Let’s march now!”

Noticed people entering the Native American History Museum. Security was allowing ten at a time, in to use the restrooms. Phew! There wouldn’t be a mass piss’n after all. (Only a wee disappointed about that.) Inside, there was a cafe and a live band playing for room full of empty seats. Bizarre contrast to the eye-popping crowds outside. Savored the opportunity to rest my feet and plug in my phone. By the time I left the building, the crowd was flowing into the streets, creating space to move about freely. This enabled me to see the stage for the first time.

Holy smokes – there was Madonna.

After rocking out for a few minutes, reunited with Alicia & Janique. Meandered through the DC streets, me loosely orbiting around them, trying to capture the mind-boggling scene on video. Every street was swarming with peaceful marchers, in all directions. Kept walking until our stomachs told us, time to find food.

And what a meal it was. We were invited to a dinner party in Georgetown, at the luxurious home of a former press secretary. Would’ve been happy to stay there indefinitely – she and her husband were so flippin’ cool. But then the entire group took a caravan of black SUVs to the National Press Club for a Town Hall event. This included Women’s March co-organizer Linda Sarsour, the President of Planned Parenthood, Cecile Richards, Gloria Steinem and several incredible women’s leaders, discussing direct action plans and where we go from here. Here is a link to a video of the full presentation.

The key term was Intersectional Feminism. It means the new wave of feminism is about inclusivity, acknowledging that no matter what type of oppression we are fighting, whether it is sexist, racist, classist, ableist, or any other unfair treatment, we are fighting the same enemy. Although we are in volatile times, it is a period of coalescence, because our unmistakable power is compounded when we work together. So it’s kind of cute that we’re referred to as “snowflakes” for having the audacity to be outraged.

Because as a wise friend from the internet said, “What does a whole lot of snowflakes make? An avalanche.” 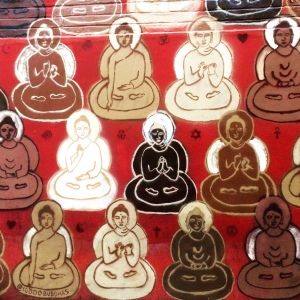 Life's a trip; this is Audreality. View all posts by AUDREALITY

Born and raised in Portland (Oregon), my aim is to capture bits of this “odd” reality, full of humor, beauty, friendship and discovery, in order to preserve and share it with the world.

Less than 2 weeks out from Portland Century Relay! Can’t waaaaaaait
Dinner en Blanc with Miss Erica
Fritz, daring me to rub my face in it.
What a weekend 🎉
Finally launched my glass paper airplane by the incredible @jenfullerstudios 😍
Kicking off the bday w/ 7am stair party 🎉
Can’t we just stay in bed?
Happy birthday Bernice! 100 years young 🎉
The note inside says, “Hello, my name is OLOMAN (Chinook for ‘hungry old man’). I am one of the Mother Mud People. I protect that which my name names. I bring surprise blessings to those that find me, but only if you do not keep me. You may leave me here, or you may move me under another tree or bush. Blessings to you and those you love.”

Want original prints or custom art?
Looking for a small-scale film production for your next trip or event?
>>>
AudrealityPortland@gmail.com