It started on a slow day, back in May: That’s when I made a list of aspects in life where I’d like to make improvements – everything from dietary adjustments, to physical fitness, to regular writing. I wanted to run more and do more push-ups, while drinking less and not smoking so much weed. For some reason I thought it would be fun to strive for all of these goals (and more) at the same time. And it started out great! On my best day, I managed to tick off 5/8 of my goals. I was doing pretty well for a while, but the only thing I managed to accomplish for a full 10 days in-a-row was a hundred push-ups.

My lofty plans hit a snag – or rather, a deep rut – when I had a minor bicycle accident. It caused significant internal bleeding in my left quad as well as a “crunchy” wrist injury. That sidelined my progress for a bit.

Attempted to climb back on to the wagon a couple weeks later, focusing on the meatless challenge. This seemed doable, especially in Portland, because we are such a food mecca. I discovered a whole new world of culinary delights… including Harlow on Hawthorne – SO GOOD – and a vegan food cart called Dingers Deli (at the pod on SE 43rd & Belmont) that has the best meatball sub I’ve ever had the pleasure of eating.

Not to mention, it’s gorgeous: 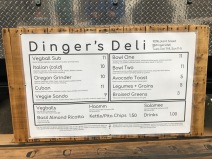 Alas, it was also during this challenge that I took a last-minute trip to LA, which does not have the kind of food scene we so thoroughly enjoy (and tend to take for granted) in Portland. There, in the land of taco trucks on every corner, I lasted about two days before throwing in the meatless towel.

Now that my momentum was shot, I was also suffering a major gap between paychecks. I had to work my ass off (real work, not just my flab), which meant long days with nothing but whatever was provided on set, doled out once every four or five hours, buffet-style, to a herd of worn-out stagehands. That’s when survival instincts kick in and you’ll pile as much on your plate as will fit, and consume it ALL as fast-as-possible. Because at 3am when you’re in the middle of a 16-hour shift for the opera? Who cares if there’s cheese, meat or even a stray hair in your food! Put it in me already.

Here we are, an entire summer later and what have I got to show for myself? You might say my “10-Day Challenge Super Series” was a failure. But I prefer to see it another way: As with all goals, we first choose a target, then attempt to execute the actions that we think will get us there. We don’t necessarily arrive at the desired destination. At the same time, we get closer, somewhere different, to a place with a new set of variables and factors to suss out.

Attempting to tackle my 10-Day Challenge Super Series, I learned that some of my goals were downright preposterous. (Going vegetarian, with a total lack of hanger management? Forget it.) Yet I DID learn about some deeeeeelicious places where I can sub out a few meals with something meatless. So overall? Sure, I failed. Effecting change is gradual; I’ll take what I can get.

Life's a trip; this is Audreality. View all posts by AUDREALITY

Born and raised in Portland (Oregon), my aim is to capture bits of this “odd” reality, full of humor, beauty, friendship and discovery, in order to preserve and share it with the world.

Want original prints or custom art?
Looking for a small-scale film production for your next trip or event?
>>>
AudrealityPortland@gmail.com